Takin' Over the Asylum Review 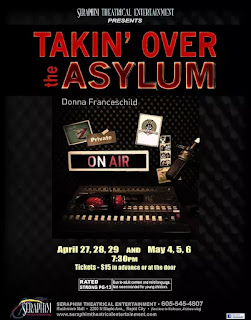 It’s been a while since the last time I blogged. That has a lot to do with my lack of things to blog about. Not to mention the lack of time... And... Well, motivation plays a lot into that as well.

I had a Thursday night off for once and found myself in Rapid City for a variety of reasons. I figured since I finally had it off and was in Rapid, why not spend the evening watching a show at Seraphim Theater at the Rushmore Mall as I’ve been wanting to for what feels like an eternity. And you know what folks? I was NOT disappointed. I was, however, pleasantly surprised.

Seraphim Theatrical Entertainment presented the audience with the stage version of “Takin’ Over the Asylum”. Spearheaded Bridgett Hill, infused by director Stephen Farruggia, and empowered by an amazingly talented cast, TOtA is a tale about loonies.

Oh don’t worry. That’s what they call themselves. The Loonies. And they are indeed proud to be loony. Based on the BBC Scotland miniseries of the same name which originally aired in November of 2000, TOtA introduces us to Eddie (Nick Rombough), an aging alcoholic window salesman who takes a gig operating a radio station at a psychiatric ward. It’s here that we meet the rest of the show’s colorful cast of characters ranging from the manic Campbell (played here by David Scott), to the Obsessive Compulsive germaphobe Rosalie (Heidi Dehn). And those two are only the tip of the iceberg.

The story tackles the tough, and often controversial subject of mental illness. But it takes heart not to go overboard. They took risks, but not at the expense of alienating the audience which is something that a lot of similar shows with similar subject matter tend to struggle with. It’s a tough balancing act, but TOtA and it’s cast does it flawlessly and brings in levity where needed. As someone who suffers from OCD himself I can truly appreciate that.

Performances in the show were top notch and I can honestly say there wasn’t a single character that I didn’t fall in love with. No matter what their mental illness may be Campbell’s mania drives him to a point of stubborn unwillingness to let go of his dreams and becomes all the more inspiration because of it. Rosalie is so thoroughly OCD about cleanliness that I actually started wondering if I should go home and start cleaning my apartment (trust me, it needs to be cleaned). Francine (Andi Waters) had me keeping my fingers crossed that she would come out of her shell and overcome her demons. Eddie was delightfully caring for his “loony” partners. Fergus (Tyler Mathison) is the kind of lovable schizophrenic genius that makes you want to hug him. Hector (Jack Fitch) is a fun, flailing, mess. Aileen (Haley Jones) was exquisitely angry. And Margaret (Kai Pendragon) couldn’t possibly make being childishly naive look more fun. Of course you’ll wind up hating Stuart and Dr. Evan McDonalds (but you’ll absolutely LOVE watching Jason Riggins and Evan Slowick play their respective roles. Jason manages to steal the scene on more than one occasion).

Set design was great and full of little surprises. The balcony scenes were a nice touch and caught me a little off guard. But in a good way. However, if I had to be nit picky about something it would probably be the lack of detail in the set. Obviously stage design a tricky endeavor and building a set that doesn’t overshadow the cast it supports is always preferable, but then again I’m a sucker for a set that just comes to life and becomes its own character. Tells its own story without ever speaking a single line of dialogue. This is a very minor gripe though and it hinges more on my own personal taste rather than necessary aesthetics. It was very well constructed and thought out and it served its purpose well, but a little more could have gone long way for me.

At the end of the day Takin’ Over The Asylum isn’t about flashy sets or fun characters. It’s about mental illness. It’s about understanding mental illness. I went into this show blind as a bat. No backstory. Nothing. I hadn’t even heard about the original BBC miniseries until I picked up my program next to the Seraphim ticket booth. In a way I think that’s a good thing because it completely destroyed any predisposed ideas I may have had running through my head (I have a LOT of those) and instead left me feeling a little vulnerable. I nearly started crying the second I started reading the program info because I suddenly realized that I was about to watch a show that hits close to home. Closer than many may think. And this is a good thing because part of overcoming mental illness is facing it head on. Sometimes you just gotta suck it up and deal with the mess inside your head and that’s what sitting through this play forced me to do. I admit I was an anxious mess at times and literally started pulling the hair out of my beard (something I’m apt to do when my anxiety runs high). Part of me was worried that the show might miss the point entirely and another (smaller) part of me was worried that I was in for two hours of the same stigmatic ridicule that I’ve dealt with my entire life.

It was so delightfully on point that it choked me up on numerous occasions. And while I barely managed to fight back the tears during the show, rest assured I was a blubbering, swerving idiot the entire 45 mile drive back to Spearfish. You can see Takin’ Over the Asylum April 28th and 29th and additional performances May 4th, 5th, and 6th at 7:30pm at Seraphim Theatrical Entertainment in the Rushmore Mall. Tickets are $15 at the door. I would HAPPILY pay more to see it again. Do it. Don’t think about it. Just do it. Please note the show is a hard PG-13 and is NOT recommended for children.

Seraphim Web Page
Posted by Unknown at 12:41 AM